Flanneurism, Spectacle and Modernity and in the Photographic Albums of Wasif Jawhariyyeh

Wasif Jawhariyyeh recomposed his memoirs in the early 1960s, when he was in his sixties, on the basis of his notebooks, and on notes and captions inscribed into his photographic collection which goes back to the beginning of the century. In few cases he used verbal recollections attributed to his father going back as far as 1845. Paradoxically this would be a case were the photographic collection, and its annotation, constituted a major source for the written memoirs, and not vice versa—as would be expected. I believe this to be the case since the written captions, and annotations for the photographic albums identify people and events with a dating reference that was either contemporary to the events (1912, 1917, 1929,1933, and so on) or go back to the 1950s when he resumed his musical career.  Another marker comes from inscriptions and dedications made on images and musical notes.  Wasif’s musical notebook, which contains the notations of Jerusalem music that was performed at the turn fo the century, includes a an opening dedication to ‘our beloved Sultan Abdul Hamid’.

A picture of Wasif taken in the late fifties shows the man on his sixtieth birthday, lying on garden lawn in a silk abbayeh near the Beirut corniche with a mixed look of boredom and nostalgia. An aging dandy and traumatized flaneur. His flaneurism is recalled from the earlier days of his bachelorhood—before his marriage to Victoria, and before he became ‘gainfully’ employed in the Registry.

The Ottoman era was coming to a close. Wasif was entering his adulthood, but not quite an age of reason. These were the years of bachelorhood, before he got married and settled down. He had been overwhelmed by what he called a “period of total anarchy” in his life, ushered in by the death of his patron, the mayor of Jerusalem, Hussein Effendi al-Husseini. Living like a vagabond, sleeping all day and partying all night had left him bereft, in a condition he describes as “vagabondage.” When his mother complained about him coming home late at night, if at all, he retorted with the famous line, “Man talaba al-3ula sahar al-layali” (“He who seeks glory, must toil the nights”).

There is no standardized Arabic term for flaneur. Literary uses include المتسكع )the ‘wanderer’) and الصعلوك  (the vagabond). The ambivalence is related to the absence of an equivalent to what was described by Benjamin and Baudlaire in reference to a (mostly) Parisian figure that was experiencing the crisis of modernity. In our case it so happens that Wasif and many of his associate musicians were both vagabonds and wanderers. The word ‘mutasakki’ carries both the aura of ‘aimless wondering’ and parasitism—while ‘su’look, conveys a meaning of underclass rebellion that is not part of Benjiamin’s usage.

In this examination of patronage and the photographic image I will focus on Wasif obsession with the modernity of Jerusalem at turn of the century through a series of spectacles that he documented in his photographic albums. In a comment on Benjamin’s conception of photography and the flaneur Kirsten Seale makes captures the essential nostalgic feature of this relationship. ‘The flâneur’s movement”, she argues, “creates anachrony: he travels urban space, the space of modernity, but is forever looking to the past. He reverts to his memory of the city and rejects the self-enunciative authority of any technically reproduced image…yet the authority of this trajectory is challenged by photography’s product: the photograph, a material memory which is only understood by looking away from the future, by reading retrospectively.”

The spectacles I have used to describe Wasif’s use of the photographic image are focused on the transformation of the cityscape and its ceremonial processions (Nabi Musa, Sitna Mariam, the Saturday of Light Easter parade)—all of which transcended their original religious content into public syncretic celebrations. Wasif the flaneur as “su’look vagabond” was a keen observer of the traditional performative theatre (the shadow play—karagoz—and its earlier more primitive manifestations in Sunduq al ‘ajab—the wondrous ‘magic box’). The third spectacle was a spectacle of collapse—the events and savage imagery of the Great War (hangings, digging of trenches by corvee labour, and battle scenes). Paradoxically Wasif’s nostalgic gaze is directed at the events of the war years itself and not on the ceremonial processions. During the war years and its aftermath—Wasif was able to survive army discipline and savagery through his wits and performative skills as a musician.  Serving the Ottoman Navy as what he calls a ‘oud officer’ we see the war itself almost as a series of  joyous affairs. The famine years which devastated Syria through food shortages and locust attack were celebrated by Wasif’s bizarre musical contribution of the Karshat song—his only surviving musical composition—that became ‘the national anthem of Palestine’, as he puts it sarcastically.  In one photograph of a Damascus hanging of deserting soldiers, he managed to insert himself as a spectator of a theatrical event (‘years of anarchy’ –1917-1920) following the British occupation of Palestine and before the onset of the British Mandate and the Balfour Declaration—were spectacular days of freedom, recorded both in his memoirs of the musical nights he arranged in the old city and in Musrara—and in the photographic images he preserved for those liminal moments.  Unlike the recollections of the earlier ceremonial processions in the old city—those were pure nostalgia. 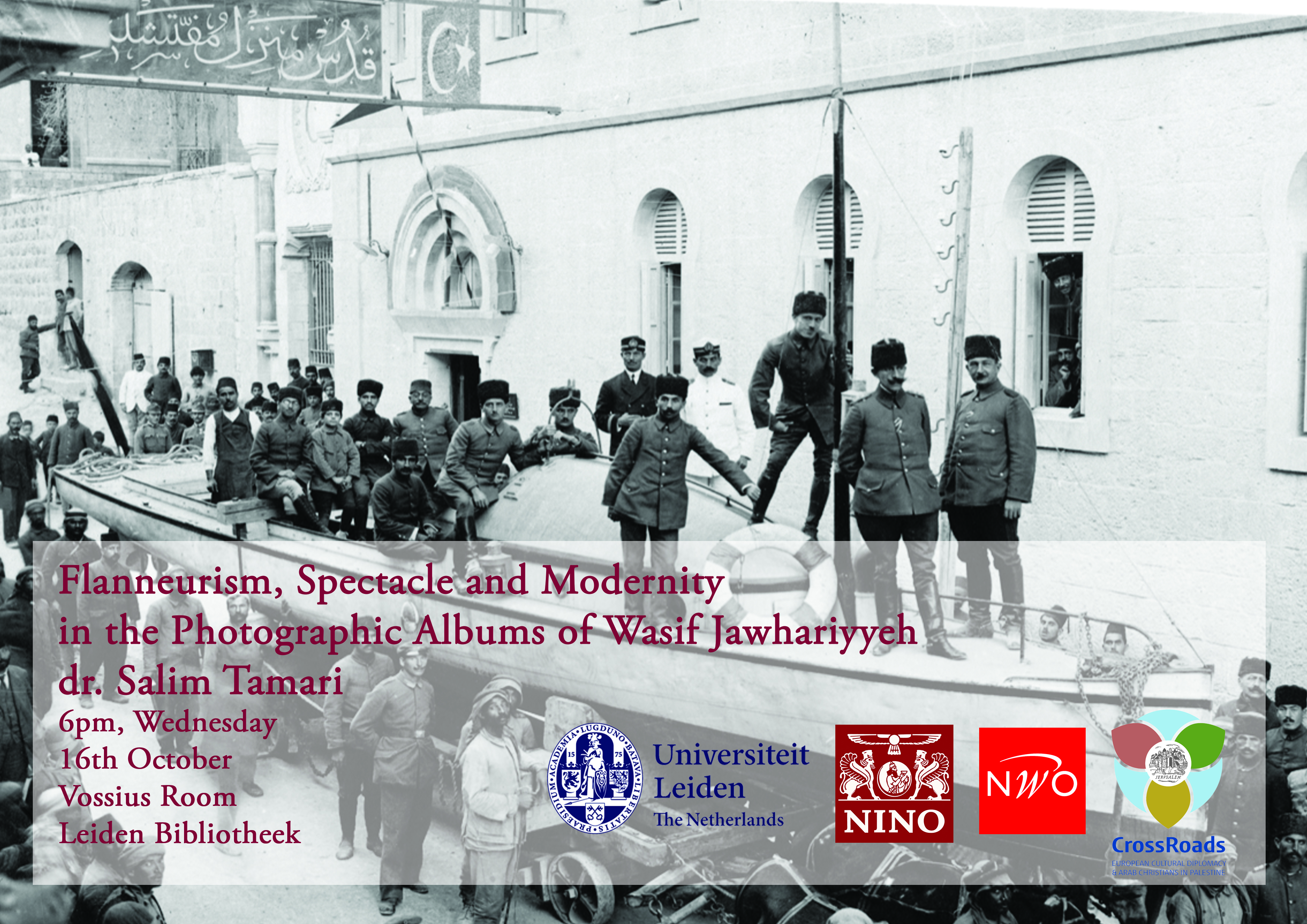