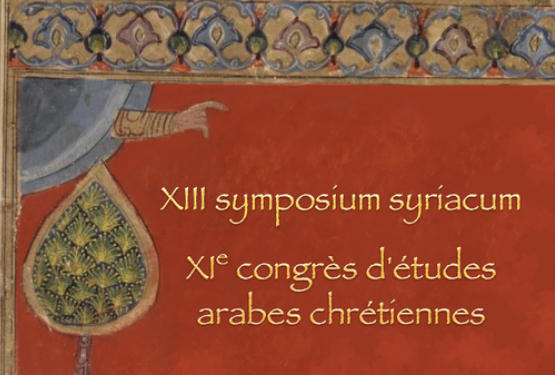 The Crossroads team will take part in the panel ‘Nichola Khoury: the Political Figure, the Orthodox Priest, the Communal Activist (Palestine, Eastern Europe, Lebanon; 1890-1960)’, that will be part of the 13th Symposium Syriacum and the 11th Congress of Arab Christian studies to take place at INALCO in Paris, 4-9 July 2022.

READ MORE ON THE CONFERENCE HERE

Ego document and Arab Christians in Palestine: the uniqueness of Nichola El-Khoury’s memoirs

The unpublished memoirs of Nichola Khoury are an important source for historical inquiry on Ottoman and Mandate Palestine that allow novel interpretations in micro history (K. Katz 2009; P. Lejeune 2005; S. Irving 2018). The historiography on Arab religious leaders in the region has left so far a lacuna in our understanding of Arab orthodox leaders, and their interactions with their local, regional and international environments.

Important political and religious figure for the Arab Christians of Palestine, Nichola Khoury played a fundamental role in the Arab Orthodox cause. The paper will investigate to what extent his memoirs allow to contextualize the character of the man behind the words, his conflicting and convoluted ambitions, his agency, at a time where many allegiances were in flux.

The paper will reconsider the role of the individual narrative in the larger narrative on modern Palestine history. It will envisage changes of scales (from a small village in Transjordan to a trip to several Eastern European countries) to understand different processes, analyzing them from different standpoints, and the links between individuals and macro historical trends.

Orthodoxy and Solidarity: Niqula Khoury’s journey to the League of Nations

In the summer of 1937, in the midst of the Palestinian uprising against British rule and Zionist immigration, the idea that partitioning the territory of Palestine between Jews and Arabs shifted from marginal proposal to a very real prospect. After the Peel Commission report, the League of Nations and its Mandates Commission debated the notion of partition at its Geneva headquarters. The Palestinian national movement dispatched a number of delegates to Switzerland, amongst them the Greek Orthodox priest, educator and campaigner Niqula Khoury. As attending the meeting itself, Khoury travelled across the former Ottoman territories of the Balkans, deploying a mixture of Orthodox and Palestinian identities to call for solidarity and support from the governments of Serbia, Romania and other countries, and particularly to urge the heads of the region’s various autocephalous orthodox churches to uphold the Palestinian cause. In tracing Khoury’s diplomatic travels across south-eastern Europe, this paper considers the diplomatic means he used to attract support, the languages of religion and nationalism deployed, and the light that his efforts to challenge Great Power plans with alternative networks of power and loyalty sheds on the ideas and strategies of the Palestinian national movement.

National Politics and Religion in Mandatory Palestine: the Contribution of Nichola El-Khoury to the Arab Orthodox Movement

The controversy within the Jerusalem Orthodox Church between the Greek establishment and the Palestinian congregation dates back to the nineteenth century. For the Palestinians, the claim to liberate the Church from the ‘foreign usurpers’ reflected the collective response to orientalist stereotypes. For the Greek hierarchy, in contrast, the communal struggle formed a threat to the alleged institutional Greek national character of the Patriarchate. The beginning of the British Mandate marked a shift in the Arab Orthodox cause, which was linked at that point to the building of the Palestinian national ideology. A prominent political and religious figure which was actively involved in this process was Nichola Khoury. The aim of the article is to contextually elaborate on Khoury’ role, paying special attention to his ‘dialogue’ with the Greek establishment regarding the national question as well as the hierarchical structures and authoritarian operation within the Orthodox Patriarchate. In particular, the research questions to be addressed are:

During the turbulence of years just after the First World War, Dutch photographer Frank Scholten travelled to Palestine with the aim of producing an illustrated Bible.  He travelled first through Italy and Greece in 1920, arriving in Palestine in 1921 where he would stay for two years.  While the bulk of his photo collection is images of Palestine.

Scholten captured a time of tumultuous change for Christian communities in the Eastern Mediterranean.  He shows us a view of the world where the role and place of Christians began to morph quickly, both with the population exchanges between Greece and the new Turkish State, but also as Palestine was entering the era of the British Mandate.  Scholten gives us a rare view of a moment that set in motion the events which shape the region today.

The Christian relationship to Islam shifted dramatically in this period.  On the one hand increasing animosity between Greece and Turkey with Population Exchanges and on the other the subsuming of religious identities as both Muslim and Christian Arabs forged new secular identities with the birth of Arab Nationalism.

Scholten’s candid documentary approach shows us the complicated mosaic of communities in the Eastern Mediterranean at the moment when the impacts of the war cemented the competing nationalisms still current today. The Scholten collection shows the connections between Arab Orthodox communities, Greeks living in Palestine at the time and a brief glimpse of Greece before the notorious population exchanges.  We get a sense of the lost interconnectedness of communities across the Eastern Mediterranean before the disruptions that modern nationalism forged.

This small exhibition will utilise 30 images (A1 size, with short didactic texts).